I remember my brother teasing me with that line as a kid and it actually felt appropriate to use since I have a cold right now. I haven't written in almost a month and continue to put it off because I feel like there is so much to say.  "Baby steps" I keep telling myself. So today we will start off with a random, quasi-pointless story from yesterday that I would like to blame on "pregnancy crazies."

Yesterday in the midst of a sore throat and runny nose I went to Sunflower Market. I grabbed some peaches and spinach and then meandered my way through the rest of the store feeling sorry for myself for feeling so sick- Never a good idea for me. By the time I made it to the register, I had also picked up cinnamon gummi bears, a bulk of strawberry sour punch straws, and a six pack of Pellegrino Aranciata which I had been craving all week.  I have definitely had moments of random cravings and impulse buys while pregnant but I normally don't really even like how candy makes me feel so this one was a weird combo.

Naturally, I started chewing on the cinnamon bears in the car on the way home, (and actually finished off the last few while writing this post.) When I got home I busted open the strawberry sour straws only to find out they were gross! They tasted like twizzlers with something funky on them.  Then after popping open a can of Pellegrino, I all of a sudden had this major surge of guilt and urge to find hiding places for everything.  I don't know if I felt more ashamed for buying candy in the first place, or buying candy that was gross... but that's not really the point. It reminded me of when I was a kid and tried to hide stolen pieces of my sister's halloween candy, which she of course had saved all year. It wasn't even good candy I would steal- it was the left over tootsie rolls and smarties that I didn't even like but ate anyway. I wasn't a clepto or anything, just a slightly chubby 4-year-old with a sweet tooth.   I stuck the strawberry sour straws and cinnamon bears under our cabinets and actually put food on top to hide it.  I "hid" the cans of Pellegrino in the laundry room  thinking "Adam will never see it." Why that felt so important to me at the time- I will never know.

Anyway, later that night after Adam was getting dinner in the kitchen, the crazies lifted and I realized I was literally hiding candy from my husband like a little kid.   So I told him I had been hiding sweets from him all day and he pulled out all my hidden loot and laughed.  We ended up throwing away the sour straws after coming to a consensus that they were in-fact gross and he asked me what else I was hiding from him. I tried to psycho-analyze myself and figure out if there was a deeper issue I was hiding from him- if the candy was symbolic for something else- but nothing came to mind and besides, we were in the middle of watching a movie :) 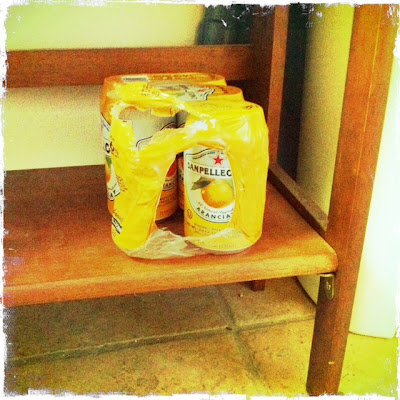 I don't mean to totally overanalyze a few pieces of candy but I started thinking today about how "hiding" things is just part of flawed humanity. I hide because I am ashamed, or greedy or don't want to feel judgement.  I hide to avoid truth. It makes me thankful for Adam and other dear friends in my life who know me so well they literally laugh at my attempts to hide fears, hurts, hopes, or $4 in candy and love me anyway. They are such a picture of God's posture towards me that I all to often forget.
Posted by amy callaway at 3:47 PM

who are the callaways?

amy callaway
After adventurous and full single lives, Adam and I tied the knot in October 2010 and had our first little Bean, Emma Kate, October 2011. This blog is a place for us to share our journey of living out what God has in store for us and the funny stories and lessons that happen along the way.